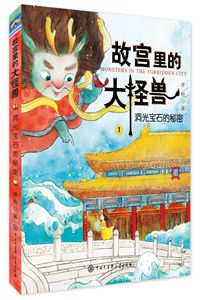 A Chinese version of Night at the Museum! This is the first children book series set in the scene of the Forbidden City and it includes 18 titles (The Secret of Stones in the Cave, The Railway Station in the Imperial Garden, The Boy Who Sleeps on the Imperial Bed, Weird Incidents in Hall of Benevolence, Judgment Made by Unicorn, Puppet Show in the Imperial Palace, The Recollection of King Baize, The Truth of the Devil Dragon, The World That Pixiu Longs for, Chasing the Black Loong, The Battle in the Turkey Bath, Heavenly Hall, Zouyu, the Super Star, Spirit of Wood, The Girl Unicorn, Kala in the Studio of Unimpeded Sound, Bizzare Story of the Dargon and End of the Adventure). Written by the renowned children’s book author Chang Yi, it contains fairy tales in which a girl student named Li Xiaoyu takes adventures in the Forbidden City and meets the monsters and animals transformed from the statues there. The surreal stories are brand new, dramatic and humorous. With the stage of the Forbidden City, the author combines historical knowledge and folk customs together, which enables children to learn better about traditional Chinese culture.