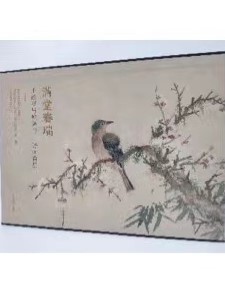 In the Qing Dynasty of the eighteenth century, Emperor Qianlong had a brush-and-ink dialogue with the past painter Wang Guxiang of the Ming Dynasty - namely the 18-page Flowers Album by Emperor Qianlong and Wang Guxiang. Emperor Qianlong wrote a poem and inscribed by himself to go with each painting, marking one of the rare examples amid the sea of calligraphic and painting works by the emperor. Why did the works of Wang Guxiang, a painter of Ming Dynasty, arouse the interest of Emperor Qianlong so much? We don't know the anwser. But history seems indeed more fascinating because of these "unsolved puzzles".